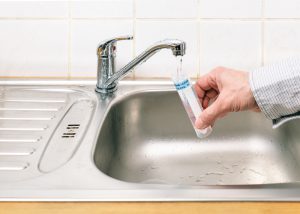 No one ever hopes that they need a water test. The idea of your drinking water being tainted can make some people feel sick just thinking about it. But it’s not a bad idea to have your water tested every few years just to make sure.

Here are some of the kinds of contaminants a water test might reveal in your water supply:

Often referred to as microbes or microbiological contaminants. This category is made up of bacteria, viruses, parasites, and protozoan. There are countless biological contaminants that can exist in the drinking water. Most of them are eliminated at the treatment plant, but if a water test in your own home says otherwise, then it could be worth it to have a UV water treatment system installed by a plumber in Rio Rancho, NM.

This category can include anything from sediments to organic materials. In your own plumbing system, you may find rust or discoloration as a result of physical contamination from corroding or aging pipes.

Reverse osmosis systems can remove these contaminants from the water for you, as their job is to block out anything that isn’t water. They do this using a small membrane that only accepts molecules of a certain size.

This category consists of naturally occurring or man-made contaminants. They’re typically measured by the municipal water treatment systems and kept within a safe range of consumption. Some of them can actually be beneficial to health when consumed in small amounts, while others can be harmful.

The best defense against chemical contaminants can be a reverse osmosis system, but normal water filters also work just as well. When you use a regular water filter, you’ll be able to target the harmful contaminants based on the kind of filter you use. This can allow the beneficial minerals to stay in the water while only filtering out the bad ones.

Nitrates are essential for plants, but not so much for humans. Fertilizers are rich in nitrates, but when rainwater and irrigated water makes its way into your drinking water, that can lead to you consuming those nitrates.

Levels of nitrates above safe levels can create blue baby syndrome in infants younger than six months old, a blood disorder caused when the nitrates prevent oxygen from being carried properly through the bloodstream.

Most occurrences of lead in the water come from older plumbing installations that use lead or solder. When the lead is continually exposed to the water, some of the lead can leach into the water and make it into your home. You won’t be able to see or taste lead, so it’s not a bad idea to have a water test done once every few years.

Small amounts of lead exposure is often not enough to do any real harm, but the risks can vary based on the individual.

If you need a water test, contact Santa Fe Express Plumbing & Drain today. Why Wait for Service When You Can Get it Express?

Why mess with the rest?